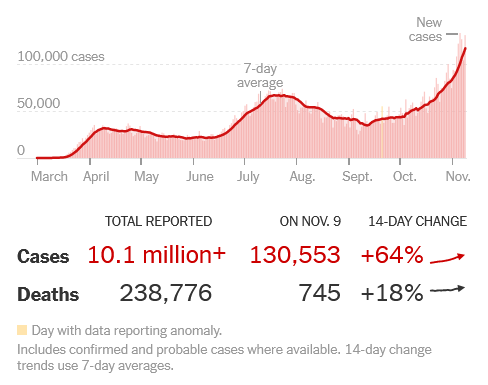 No matter how hard local and state governments try to spin it or deny it (particularly Republican governors), the third wave of infection in the United States has arrived just as the weather in most of the Midwest has cooled down after what one of the warmest weeks in recent history, which thankfully happened during the election.

But now that’s done and people will be heading indoors. From what I’ve seen a fair amount believe now that the election is done it’s more or less “safe” to be out and about, but that is mere wishful thinking.

The risk is higher than ever.

Because of this governments are starting to take action and one of the first targets is the food service industry:

None of this bodes well for any our industry. OpenTable currently has a state-by-state map of restrictions to help clientele navigate the situation but without comprehensive assistance from local, state and federal governments society at large stands to lose a vast amount of bars, restaurants, coffeeshops… ranging from chains like Starbucks and Pizza Hut, to little hole in the wall joints.

Eater wrote about it back in August. Vox said about the same in September. Mashed wrote what Andrew Zimmern thinks will happen if there is no bailout. Yahoo News has already reported about bankruptcies earlier this month. Foodable Network has an interview with Elizabeth Blau (from the James Beard Foundation) about how things are looking out for the next couple months.

Things are still looking really unstable for us. Here’s hoping now that a new federal administration is on the way in things get better because right now surviving is all we can do.